SCOTT PILGRIM VERSUS THE WORLD 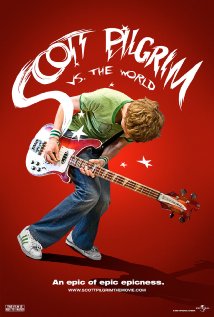 So what can I tell you about Scott Pilgrim Versus The World?

Not much, other than it’s our next film, coming this Friday (8pm, Hallhill, £5 for non-members, feel free to bring in a drink from the bar…).  That and the starring role is taken by Michael Cera.  Mr Cera made a great impression on me in a previous film society showin, Juno.  He was the geeky dork I often feel like inside (and that might go for lots of us) though unlike me in my teenage years he has wisdom and musical talent and the most gorgeous of girlfriends.

Anyway, the in a nutshell on Scott Pilgrim is ‘Scott Pilgrim must defeat his new girlfriend’s seven evil exes in order to win her heart.’

I’m hoping to hell that he creams them all.